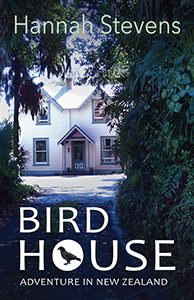 Jeanie Williams, journalist and wildlife activist, is off again this time traveling to New Zealand to see for herself the plight of the sensitive wildlife of one the most remote island nations on the planet. At the invitation of Kara Hakopa, wildlife biologist and professor in Wildlife Management at the University of Otago, Jeanie arrives in Nelson on the South Island. Along with Joseph Shockley, a student from the university, they drive down the coast visiting splendiferous locations along the way, learning about the colorful history of the island, its people and the unique wildlife.

As they are traveling, Jeanie once again suspects there are forces trying to thwart her efforts to protect the wildlife on the planet. Her suspicion is borne out halfway down the coast. Someone has their own agenda and will do anything to stop Jeanie from uncovering the truth even if it means murder. Can Jeanie Williams outwit a dark and clever adversary? Or is this her last adventure?

Bird House is available on Amazon.com and Nook.