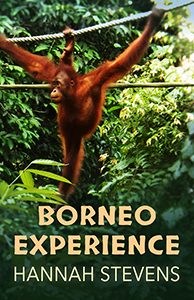 For the past several years Jeanie Williams, former war correspondent turned wildlife activist has been traveling the world reporting on the plight of the wildlife on our planet. After having been on assignment in New Zealand, South Island she was ready to return home, when her boss at WorldCorp News in New York City contacted her and asked if she would travel to Sabah, Borneo to report on pet trafficking of the wildlife in that region. When he told her about orangutan babies being ripped from their mother’s arms, she couldn’t resist. Once she arrives, however, she finds the problem more complex than she ever imagined and the powerful trafficking cartel are again trying to thwart her efforts to tell the world about the cruelty they inflict on the animals.

This is the fourth in a series of mysteries by Hannah Stevens based on her world travels. The first being Murder on Safari set in Kenya, Africa, Iceberg Murders, taking place on the Antarctic Peninsula and Bird House Adventures in New Zealand, South Island.

Borneo Experience is available on Amazon.com and Nook.