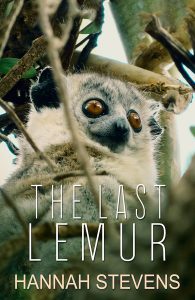 Jeanie Williams, Wildlife activist, is on the road again, this time traveling to the remote island of Madagascar to report on the plight of the lemur, the indigenous primate native only to the island. She learns of the habitat loss for these endearing creatures, but also that they are under siege due to pet trafficking. Once more, the cartel looks to eliminate her and prevent her from telling this important story to the world. While on the island she visits ValBio, a bio diversity research center with scientists designed to help the indigenous people of Madagascar understand the value of conservation.

On her way Jeanie travels through Nairobi, visiting the David Sheldrick Wildlife Preserve to see Tlowanna, the baby elephant she helped rescue from her mother who had been killed for ivory. And her travels also take her to Morocco where she rendezvouses with her love interest Rocky Hunter, a kindred spirit and fellow wildlife activist.

The Last Lemur is the final book in the Jeanie Williams Mystery series which includes Murder on Safari, The Iceberg Murders, and Bird House Adventure in New Zealand, and Borneo Experience. Last but not least, not in the series, the very sweet story She Sleeps With Dogs.

Other books by the author written under her real name, Elaine Mays include her memoir, Battle of the Wills and Diary of a Breast Cancer Survivor.

She lives with her two dogs, a Brittany spaniel, Lily and a Weimaraner, Sophia in Phoenix, Arizona. You may visit her author web site at www.hannahstevensauthor.com  She also has a very inspiring cancer blog; www.alittlerain.com.